Photos of the 2016 USA ARDF Championships 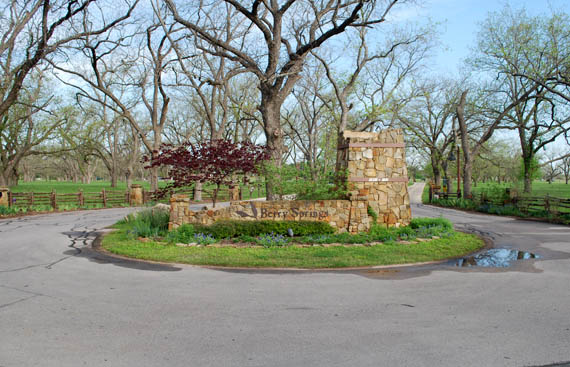 The 2016 USA ARDF Championships got under way on Wednesday, April 6 with a no-medal practice session at Berry Springs State Park and Preserve in Georgetown, Texas. 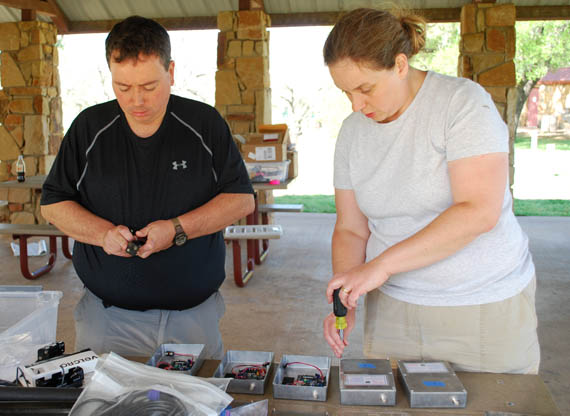 Hosts for this year's championships were Kenneth Harker WM5R and Jennifer Harker W5JEN.  On this practice day, they tried out the five 80-meter transmitter boxes that Jen had built for these events.

Inside one of the transmitter boxes. 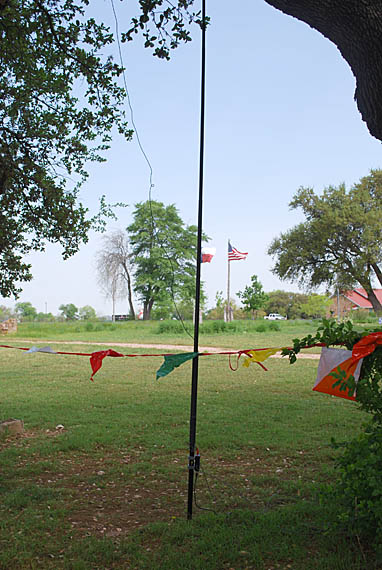 The 80m antennas were wires held up by large fishing poles, with matching networks at the base.

Texas Bluebonnets are in full bloom during April.  Berry Springs Park had lots of them. 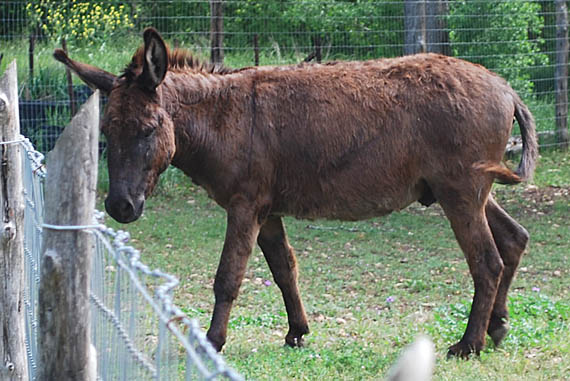 Park visitors are encouraged to give apples and carrots to Bob and Amigo, the park donkeys.

Zhonghao ("Charlie") Xu (at left) learned ARDF in his native China.  Now he attends high school in Wichita, Kansas.  Having recently suffered an injury, he didn't think he would be able to compete at the championships, but he came to help out.  Later, he decided to try some of the events.  Here he gets acquainted with second-timer Bill Wright WB6CMD. 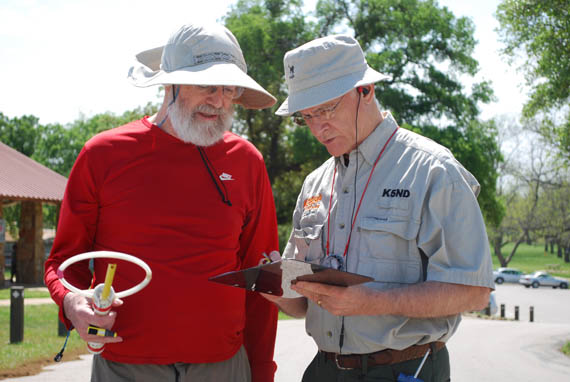 Jim Wilson K5ND (at right) is a Scout leader who came to the practice to learn about 80-meter ARDF and how it could become a Scouting activity.  Here he got some pointers from Dale Hunt WB6BYU, whose 80-meter ARDF receiver design has been published in QST Magazine. 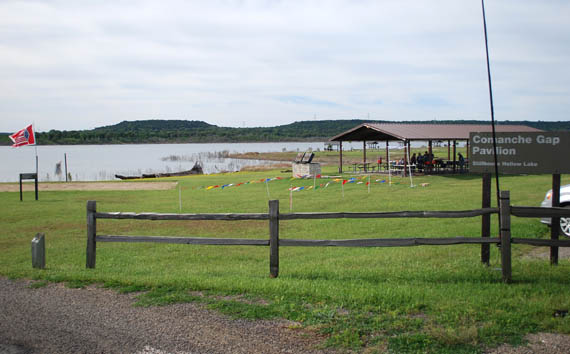 The first official competition was foxoring on Thursday, April 7.  It took place on a cloudy and windy day at Dana Peak Park on Stillhouse Hollow Lake in Harker Heights, Texas.  Start and finish were at the pavilion right on the shore.  Impounding of receivers prior to the start is not necessary in foxoring because the transmitters cannot be heard at the start. 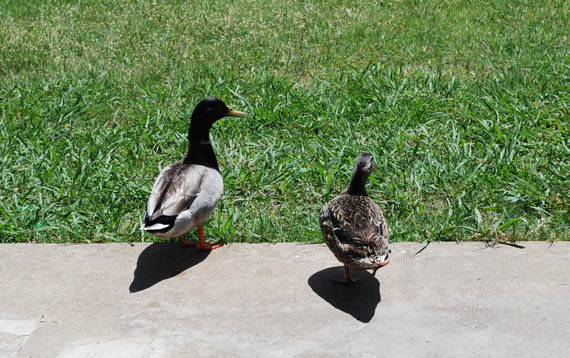 All of the wildlife here was friendly. 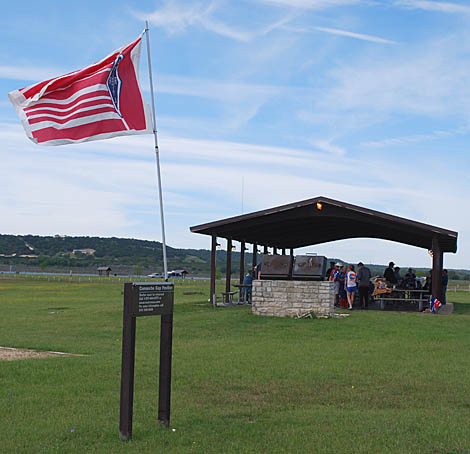 Winners of these championships may be invited to join ARDF Team USA for the World Championships in Bulgaria.  Teams represent national Amateur Radio Societies, so it was appropriate that the American Radio Relay League flag flew over these events.

This was the first formal competition, so international rules were followed carefully.  Competitors wore their numbered bibs for easy identification.  Starting groups consisted of persons who were not in the same age/gender categories.  Groups were called up to receive their maps, after which they cleared their electronic scoring tags ("e-sticks") and proceeded to the starting line.  This took careful coordination because for foxoring, the starts are only two minutes apart.  Here Lori Huberman (W21) studies her map and awaits the starting tone, while Mike Minium (M50) affixes his map to his map board and Harley Leach KI7XF (M70) clears his e-stick. 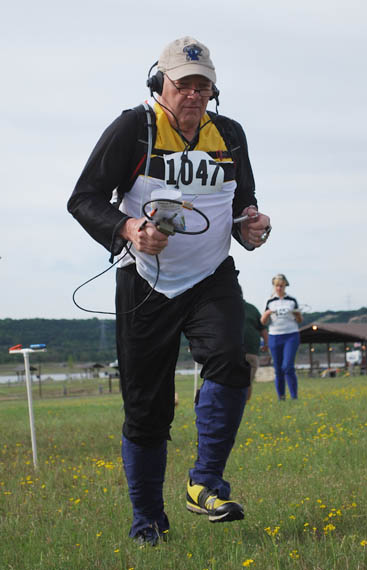 Dick Arnett WB4SUV leaves the starting line on his way to a bronze medal in M70.  There was no starting corridor, so competitors tended to go in different directions, depending on their categories and the transmitters they were required to find. 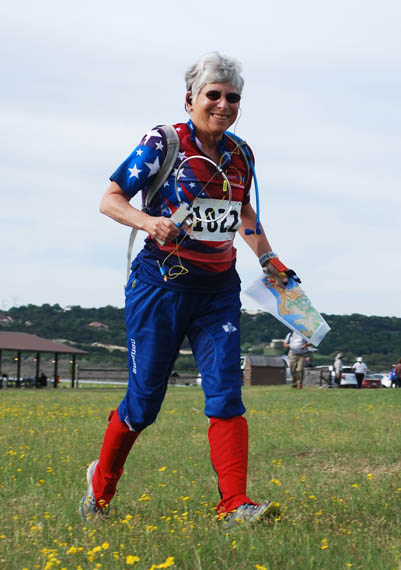 In foxoring, the competitors get a map with small circles marking the approximate locations of very low power 80-meter transmitters.  They use their orienteering skills to navigate to the circles, then their 80-meter equipment guides them to the actual transmitter somewhere within.  There are no flags at the transmitters.  Ruth Bromer WB4QZG (W60) has many years of experience as a classic orienteer, so foxoring is natural to her.  She took gold in W60 for this event. 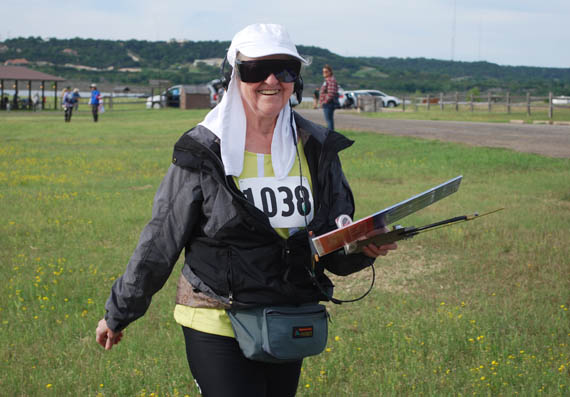 There goes Karla Leach KC7BLA (W60) onto the foxoring course.

Back to the 2016 USA ARDF Championships report page