A medal-winning transmitter hunter and member of the Hospital Disaster Support Communications System (HDSCS) of Orange County California has been named as a 2004 winner of the Hiram Percy Maxim Memorial scholarship award. Nineteen-year-old Jay Thompson W6JAY of Santa Ana, California was selected during a meeting of the Board of Directors of the American Radio Relay League on July 17, 2004.

The Hiram Percy Maxim Memorial Award is given annually to a licensed radio amateur under the age of 21. It is intended to provide a tangible reward to those deserving young amateurs who contribute their time, skills and energies daily through their commitment to Amateur Radio. The winner's accomplishments and contributions to both the community of Amateur Radio and the local community are exemplary. Winners receive a cash prize and a suitably engraved plaque. W6JAY received his award on August 28, 2004 at the annual ARRL Southwestern Division Convention in Phoenix, Arizona, where he also gave a presentation about getting started in ARDF.

In 2003, W6JAY was given the "Young Ham of the Year" award by Amateur Radio Newsline®, a non-profit news service for ham radio operators.

Originally licensed as KF6TTZ, Jay upgraded to Amateur Extra class and received his special namesake callsign in December 1998 at the age of 13. The next year, he joined the ranks of international-rules transmitter hunters by competing at the First International Amateur Radio Union (IARU) Region 2 ARDF Championships in Portland, Oregon and bringing home three medals.

Y2K was a big year for Jay in ham radio. In February, he and his father (Richard WA6NOL) joined HDSCS and became very active in that organization, participating in most of Orange County's mass-casualty incident drills at participating hospitals. In the fall, they traveled to Nanjing, China as members of Team USA to the 2000 ARDF World Championships.

Jay has continued his radio-orienteering and public service activities, all the while earning top grades at his high school. In the summer of 2001, he participated in the First USA ARDF Championships in Albuquerque, New Mexico, capturing four gold medals. He enjoys HDSCS meetings, including his introduction to Personal Protective Equipment for chemical/radiological contamination in the photo at right above. His emergency communications training paid off when he and his father were emergency communicators at Garden Grove Hospital following the April 2002 Metrolink train crash in Placentia.

Congratulations to W6JAY and his family! Below are some more photos. 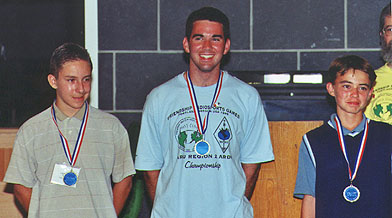 Jay and a competitor in another age category bolt from starting line at the 2000 ARDF World Championships in China. Contestants are individually timed. (Photo by Richard Thompson WA6NOL)

W6JAY on the winners platform at the 2001 ARDF Championships in Albuquerque, beside medal presenter Mike Eaton K5MJE.

At the annual HDSCS Year-end/Year-beginning meeting in January 2003, Jay confers with Al Way KC6NLP about a question on the "Final Exam." At that meeting, Jay and his father received certificates for being in the "Disaster Dozen," the twelve most active HDSCS members of 2002. 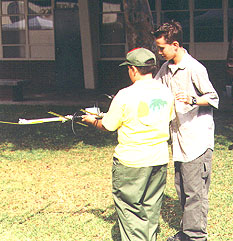 W6JAY explains radio direction finding to a Scout at Jamboree-on-the-Air 2000.

Back to the HDSCS home page

Back to the HDSCS news page