of the 2012 USA ARDF Championships 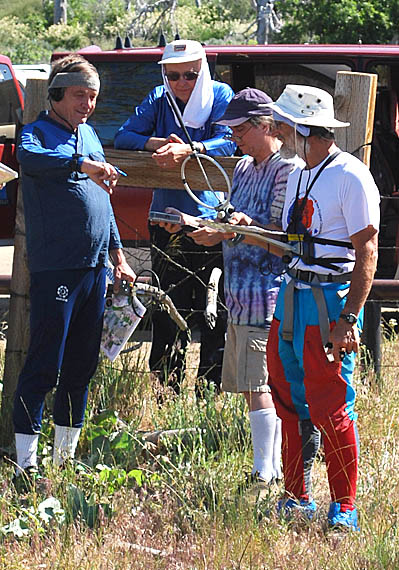 Day two of the training, Thursday, started out with a full course on the 80-meter band.  The trainees set out in groups of two, but of course they didn't continue to hunt together.  The first group is waiting for the signal from Woody to go out. 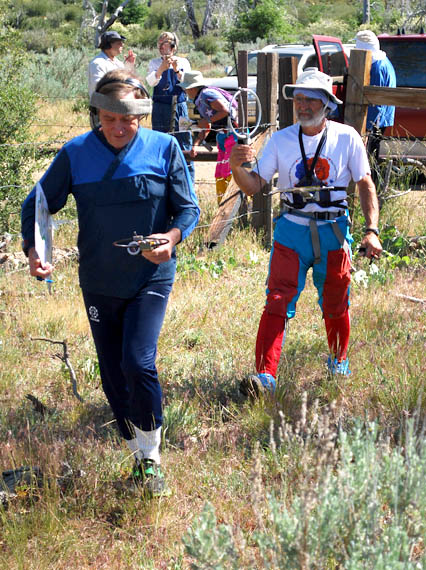 And they're off!  Jay Hennigan WB6RDV is just ahead of Joseph Huberman K5JGH. 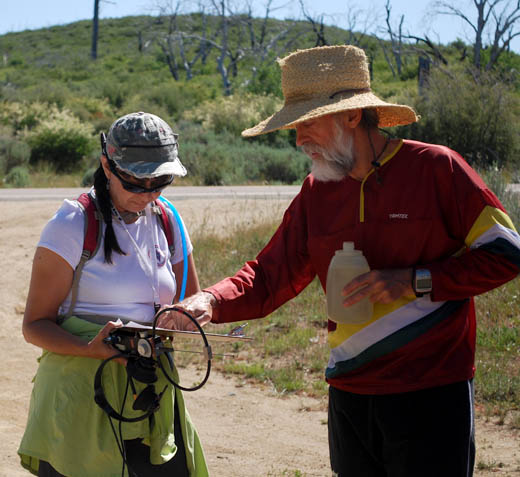 The training camp is a good place for newcomers to get advice from experts.  Chris Sanders KE6BRY is getting some pointers from Bob Cooley KF6VSE. 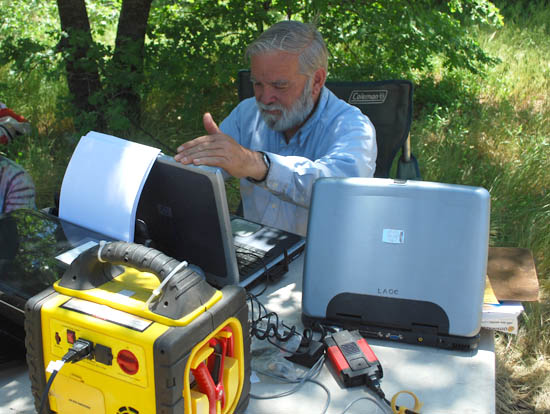 The training hunts and the championship events used electronic scoring.  Marvin Johnston KE6HTS spent lots of time with the numerous computers that he brought along.  One of the other computers was used to print the maps. 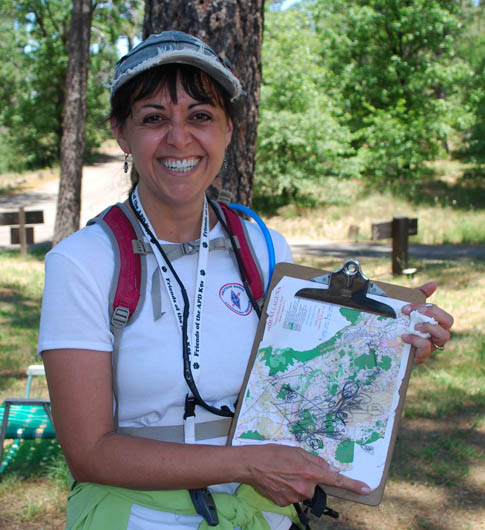 Most ARDFers plot some bearings on their maps so they can triangulate as they move along and estimate the approximate position of the fox transmitters.  Chris Sanders KE6BRY plotted lots of bearings.

Diaspores ("foxtails") were everywhere on the course and embedded themselves into the shoes, socks and pants of the foxtailers.  Chris Sanders tried to combat them by wearing leather "gaiters" and taping the tops of her shoes.

Here's the "after" photo.  Maybe tape wasn't the best idea after all. 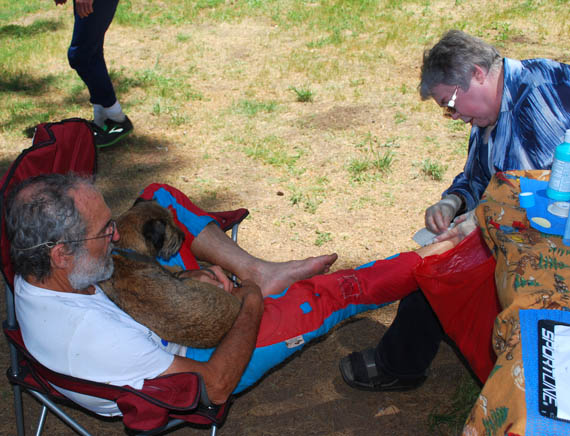 As always, field medic April Moell WA6OPS was kept busy with minor scrapes and other health issues.  This year, the biggest problem seemed to be blisters.  But the foxtails were also problematic, as Joseph Huberman K5JGH got some in his shoes that punctured his skin. 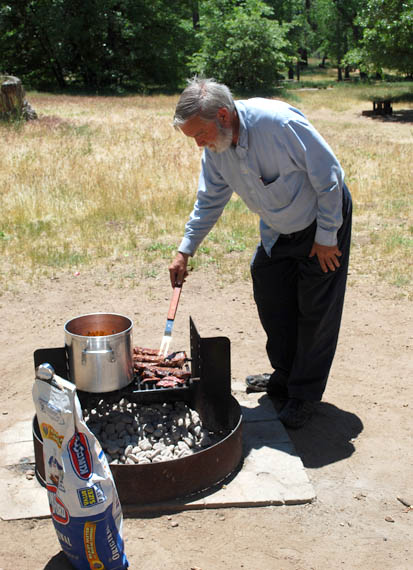 Friday afternoon was the sprint competition, with two groups of five fast-cycling 80-meter transmitters to find.  Competitors set out one at a time at one-minute intervals.  Marji Garrett KJ4ZKC has just left the starting line at the Desert View picnic area. 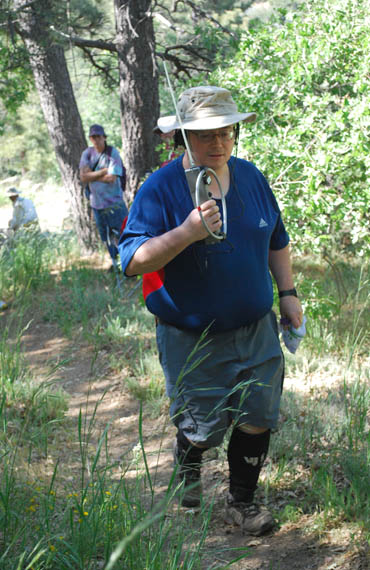 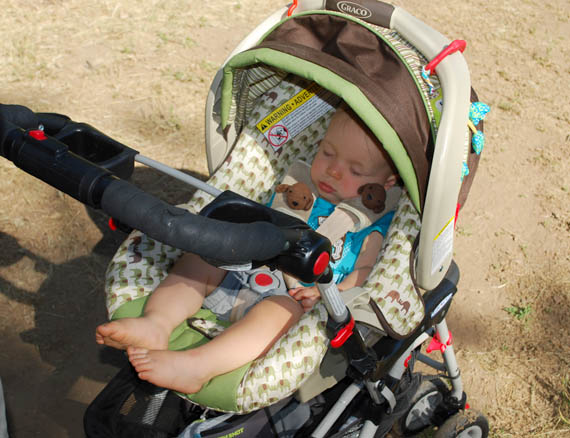 Ken and Jen (W5JEN) Harker brought their almost-one-year-old son James along with them, but not out on the courses, of course. 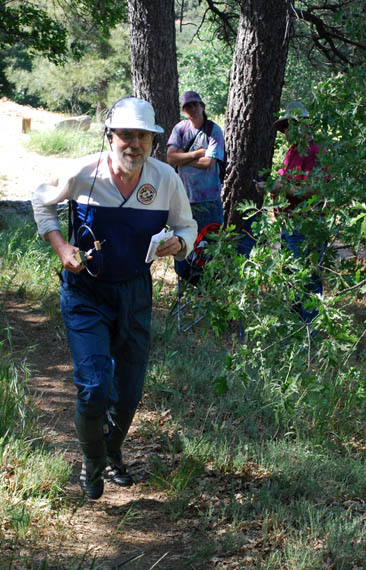 Mike Schuh KF7QDZ was a first-timer at ARDF championships, but he is a long-time orienteer. 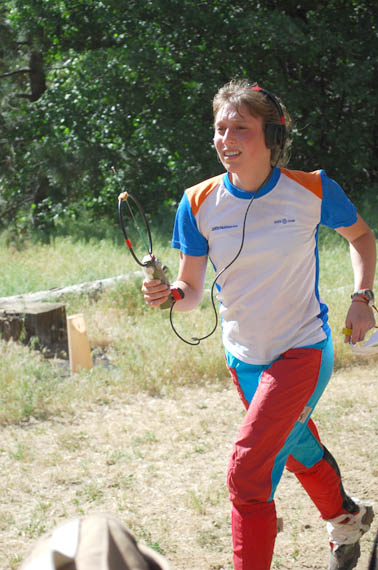 Lori Huberman, a medal-winner at previous USA championships, runs into the campground at the midpoint of the sprints. 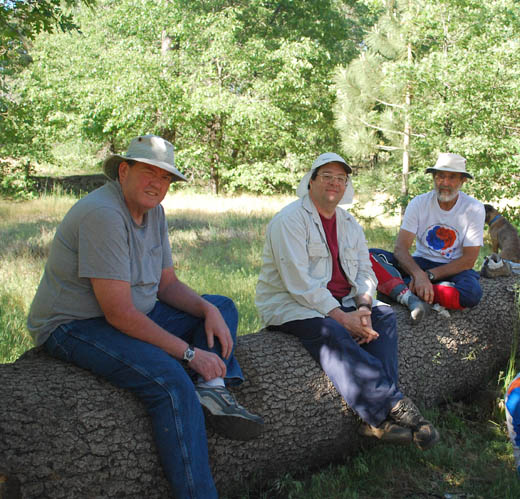 At the end of the sprint competition, Scott Moore KF6IKO, Bill Smathers KG6HXX and Joseph Huberman K5JGH are enjoying the mountain air.

Back to the 2012 USA ARDF Championships report page