(In reverse order by date)

Weather was ideal at Bonelli Park for our final on-foot transmitter hunting session of the year.  However, when April and I arrived shortly after sunrise, there wasn't a parking place to be found near our gathering point.  The park was full of people warming up for the annual Turkey Trot 5K/10K run.  Fortunately, the run was over and most of the vehicles were out of the way by the time that foxhunting enthusiasts were arriving to build antennas and sniff out hidden transmitters.

For the second time this year, there was a good turnout from the GOTAhams club members, many of whom live near to Bonelli Park.  There were at least a dozen of them, all very enthusiastic.  They fired up one of the park grills and treated us to hot dogs and Texas chili, very welcome after a trip around the park finding transmitters.

There were quite a few of our "regulars" in attendance also.  Most started out or warmed up by finding the five practice transmitters that I put out nearby.  Then those who were still eager for more walking or trotting were given a map and an electronic scoring "stick" and were sent out on the timed five-fox two-meter ARDF course.  Scott Moore KF6IKO set this course, which turned out to be a bit more difficult than he expected.  Here are the results:

My 80-meter transmitter was 750 meters northeast of the gathering area on the back side of a hill.  But 80m signals aren't blocked by terrain and they don't bounce, so starting bearings were always good.  Two of the 80m huntsrs took the opportunity to try out the new RigExpert 80m ARDF set and one used a just-completed R3500 kit, with these results:

Thanks as always to Marvin Johnston KE6HTS for bringing antenna/attenuator kits and setting up a complete assembly area.  Thanks to Scott Moore KF6IKO for setting out a great two-meter ARDF course and to Bill Wright WB6CMD who helped with transmitter pickup.  April Moell WA6OPS was ready with her First Aid setup, which fortunately wasn't needed this time.  Last but not least, thanks to the GOTAhams and their prime organizers, Ken and Kathi Mixon, KC6WOK and KD6CAF for adding to the fun. 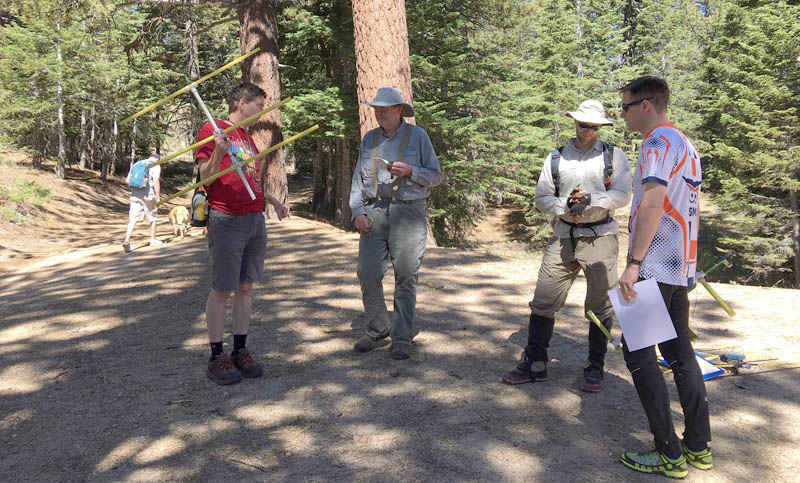 This year's ARDF training camp at Mt. Pinos featured all of the popular ARDF events and none of the bears.  As usual, organizer Marvin Johnston KE6HTS camped near the entrance to McGill Campground, which served as the finish line for the ARDF events and site of the Saturday night tri-tip banquet.

Foxoring started the activities on Friday afternoon, with six 80m transmitters to be found.  Course-setter was Marvin.  All participants found all foxes, with these times:

After a good night's rest in the mountain air, the two-meter classic took place on Saturday morning, set by Scott Moore KF6IKO.  Transmitter locations are shown on the map at right, courtesy Eduard Nasybulin. (Click on the thumbnail for full-size version.)  Numbers in bold are the two-meter foxes.  Due to an e-punch setup error, splits in the results below are only shown for transmitters 3, 4 and 5, but the overall times and control counts are believed to be correct.

The sprint, set by Eduard Nasybulin, was Saturday afternoon and had ten 80m transmitters. Unfortunately, the sheet with start times was lost. The list below shows the finish placings.

After the tri-tip barbecue and another night of bear-free sleep, everyone went back to the starting point near the Nordic Ski Base for the 80m classic event, set by Bill Wright WB6CMD.  Unfortunately, there were failures of MOE and MOH transmitters, so the results below are for a three-transmitter course.  Circled numbers in the map at right above are the 80m transmitter locations.

Thanks to Marvin for organizing and to everyone who helped with course setting and transmitter pickup. 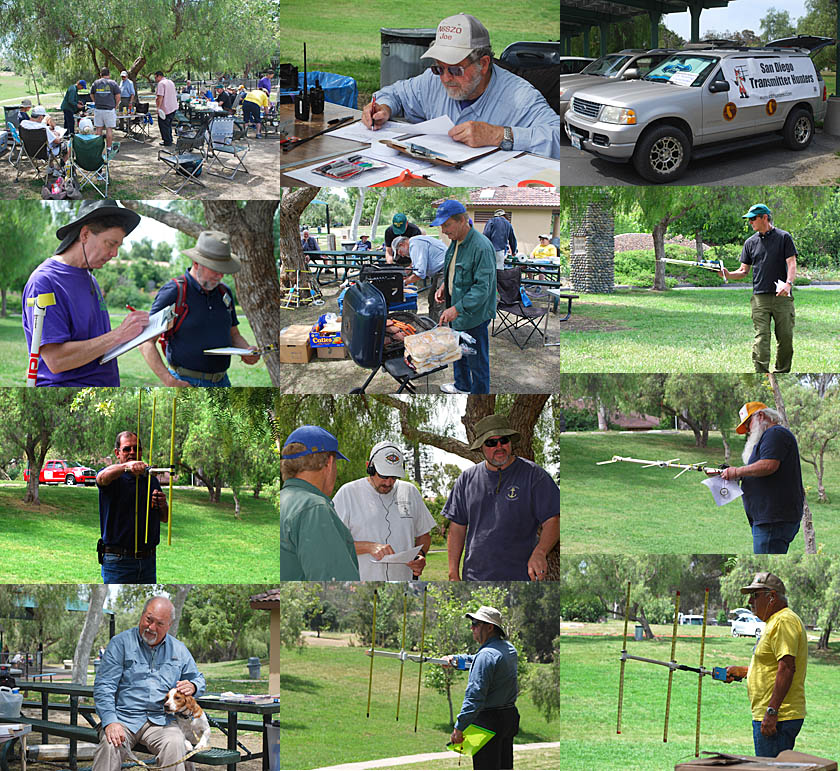 The annual San Diego area on-foot transmitter hunt brought over twenty persons to Guajome Regional Park in Oceanside.  It's a great place, not too hilly, with plenty of shade and close-by parking.  Hosts Joe Loughlin KE6PHB and Joe Corones N6SZO had their five two-meter ARDF transmitters placed and cycling in plenty of time for the 10:30 start.  Color aerial maps of the park were available for those who wanted to mark their bearings.

By 2:30 PM, the hamburgers, cheeseburgers and hot dogs were coming off the grill onto the plates of the hungry hunters.  As they discussed their experiences on the course, everyone agreed it was a great day of radio foxhunting. 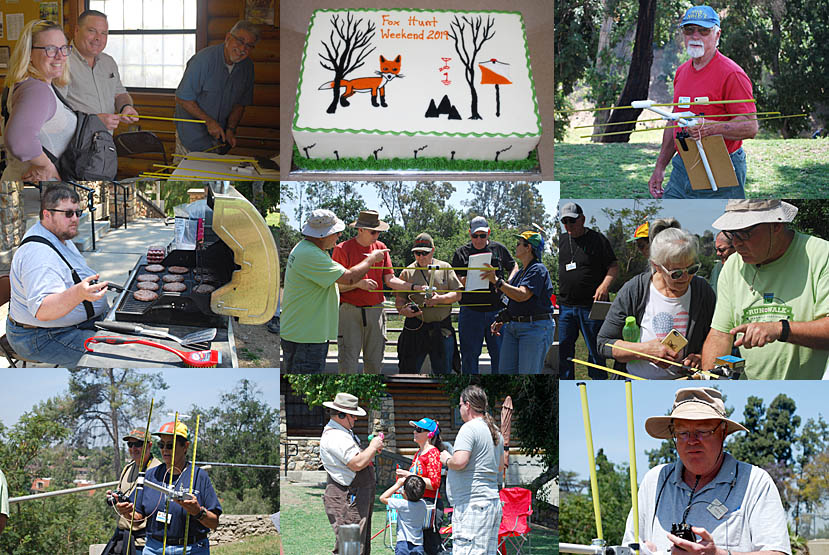 It's been a two-decade tradition for fans of food and radio foxhunting to gather in north Orange County for "Antennas In The Park."  The first gathering took place in 1998 and it has continued annually (except for one year) ever since.  Originally at Tri-City Park in Placentia, it moved to Hillcrest Park in Fullerton in 2015 and is now headquartered at the Izaak Walton Cabin there.

This year's foxhunting turnout good and everyone was enthusiastic.  Two persons built two-meter antenna/attenuator sets from kits by Marvin Johnston KE6HTS.  Most participants started out by finding the three practice transmitters nearby.  Next, seven persons set out on the international-style two-meter course.  Somehow the controller logic of transmitter MOS got scrambled and it went off the air, so there were only four foxes to find.  Some of these hunters took time out in the middle of their searching to take part in the barbecue.  Here are the results:

Eighty meters is "the other foxhunting band."  There was one 80m transmitter to find.  Judging by the results, it was probably too close to give a sufficient challenge:

Thanks to Gene and Cheryl Thorpe, KB6CMO and KE6TZU, who arranged for use of the cabin.  Thanks to Albert Solomon AG6OF for bringing his grills and cooking the meat.  Thanks to Bob Houghton AD6QF for bringing all the vittles, except for the annual Foxhunting Weekend cake, which was bright by April Moell WA6OPS.  And thanks to everyone who came out and made it a great day in the park.

Oso Viejo Community Park is a wonderful site for beginning on-foot transmitter hunters.  There is plenty of vegetation for concealing foxboxes.  There isn't much elevation change and there are paved walkways throughout.  Even though there was a major Easter weekend activity in the park, it didn't affect our session much (except for the limited parking).  Our gathering place was a spacious and shaded outside courtyard of the Norman P. Murray Community Center, just outside the room where the South Orange Amateur Radio Association (SOARA) holds its monthly meetings.

Fifteen persons signed in and most of them used their measuring-tape antennas and attenuators to seek my three practice transmitters near the courtyard.  Then they turned their attention to my five-fox ARDF course, with the transmitters all in the foliage near the paved walkways.  The shortest total course length, using these walkways, was 1.3 kilometers or 0.814 mile.  Here are the results:

Some of the participants didn't catch my request to start out on the five-fox course from the information table, so they weren't timed.

Many thanks to the members of SOARA and especially Erik Wresch W6INE for sponsoring this session.  Erik also rode his bicycle around the loop afterward to pick up the ARDF transmitters.

This year's antenna clinic and transmitter hunt at the Yuma Hamfest and Convention was well attended by those building antennas and trying to locate hidden transmitters for the first time.  Twelve people signed in to participate.

Organizer Marvin Johnston KE6HTS provided antenna/attenuator kits and introduction.  Joe Loughlin KE6PHB and I provided support during the antenna kit construction and then hands-on instructions for the practice T's and then the five main T's set out as an international style hunt.

Thanks to Bill Elkerton W6ZM, Robin Elkerton KM6OUL, Dick Foran WB6ZAM, Jerry Petrizze W6VLF, Mike Rienzo KI6ACI, Greg Gibbs KI6RXX, Ron Johnson KK6I, Mike Johnson KD7SBX and Dave Somes WB6TFC, all from San Diego, for hanging out at the start point of the hunt and offering constructive advice to folks in need of assistance and, in many cases, accompanying them out on the course to find the T's.  Five people from the San Diego area were thoroughly indoctrinated on our local San Diego activities, issued a tri-fold and encouraged to come out and ride along on one of our Saturday night hunts.

The rain stopped a little later than expected, leaving a muddy field for the ARDF session at Lake Los Carneros on February 9.  Marvin Johnston KE6HTS got one transmitter put out, then it was time for the antenna build session.  He finished setting the course at about 10 AM.

Thanks to Marvin for setting the course and to Julianne Walsh KI6DYX for helping the newcomers learn to find transmitters.  Also thanks to the hunters who helped pick up transmitters after the session.